This is one of the stories from my childhood.

It’s September 1985. I’m nine years old and I just started 3rd grade. I’m walking from school to my house. It’s a 30-minute walk because there are no school buses in Mitrovica, Kosovo.

I’m with two of my friends who are the same age as me and my sister who’s 3 years younger than me. We are laughing, kicking rocks as we walk on the sidewalk. My sister is picking up dandelions and blowing the fluff on us.

On the way home, we stop by a house my dad is building. I want to see him and say hello.

I can hear him throwing concrete at the walls inside the third floor.

It’s a three-story brick house with a red tile roof that my dad built. There’s a wheelbarrow filled with concrete, a pile of sand next to it, a bag of cement, and a water barrel with the water hose still in it. Few feet away, there’s a metal bucket filled with concrete and it’s tied to a rope all the way to a roof on a wheel. 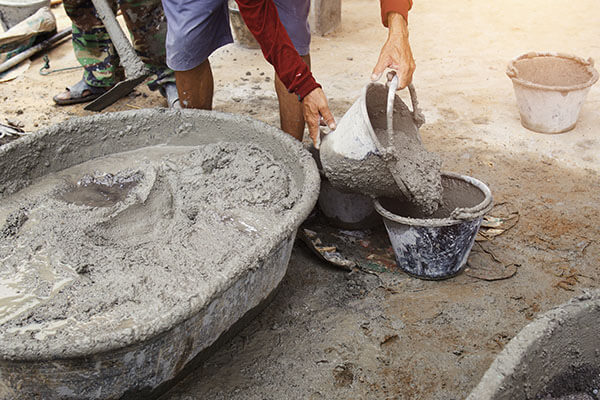 I hear my dad calling, “O Haxhi, qoma kofen,” Which in Albanian means, “Haxhi, send me the bucket.”

My cousin Haxhi is nowhere in sight. I drop my backpack on the ground next to my sister and start walking towards the bucket.

“Don’t touch it,” my sister yells behind me.

“We’re not supposed to get near the construction site,” said both friends.

I kept walking towards the bucket. I grab the scratchy manila rope and start to pull it down and the bucket starts to go up.

The higher it was going, the harder it’s getting for me. I don’t have much upper body strength. I’m as skinny as a toothpick.

I keep pulling as hard as I can. Who knew that concrete was so freaking heavy. I pull down bending my knees to lift up the bucket using my whole body.

My dad heard all the screaming and stuck his head out of the third-floor window.

Surprised and panicked, he says, “Whatever you do, don’t let go of the rope. You don’t want to fall on that concrete down there. And don’t look down. Look up here..”

Of course, I have to look down.

I don’t like the image of my brains and bones scattered on the concrete.

“Now,” he says, distracting me from those thoughts.

“This is what we’re gonna do. You bump that bucket with your body and kick it with your feet to get some of that concrete off the bucket and then you’ll start to go down.”

I trust my dad. He has a plan to save me but I have to do my part. I have to work even harder than holding on to the rope for dear life. I start to kick the bucket. I’m spinning around as I’m doing this and it’s working, a little bit of the concrete is spilling out,  most of it is falling on me. But now the bucket and I are not at the same level, I can’t push it anymore. I’m lower than the bucket and I can’t let go of my hand to reach for the bucket. I can’t hold myself on one hand. I’m not low enough to safely land on the ground. I’m stuck above the second floor window. My dad says, “Hang on, I’ll come to the second floor and grab you.” He can’t grab me, I’m too high. He brings a shovel and he’s using the edge of the shovel and the wood handle trying to pull in the rope. It doesn’t work.

“I have another plan,” he said. “This time, we’re gonna throw bricks in the bucket and you’re gonna go up to the third floor. I’m gonna catch you there.

I’m screaming and yelling, “Nooo, I don’t want to go higher. I just want to get down to the bottom.”

“Qiki” he says in Albanian, which means baby girl, “ there’s no going down without getting hurt.”

Then he tells the kids to bring bricks to the second floor.  Those kids were moving as fast as they could but to me it felt like they were moving in slow motion.

It feels like it’s taking forever. I’m holding on to the rope, now even my cheek was on the rope getting splinters on my smooth skin. My friends and my sister are on the second floor and they start to throw bricks into the bucket.

They are terrible at aiming and couldn’t land a single brick in the bucket. My dad is at the third floor window giving them some advice and ready to grab me when I get to his level. So the kids start to make progress and they land bricks on the bucket. With each brick they throw in the bucket, the rope jerks, I move up and the bucket moves down.

It’s working. I’m almost there. “One more brick, and then stop,” dad yells. But before dad finishes that sentence, one kid throws another brick into a bucket and now I’m above the window where dad is.

He manages to grab my feet and pulls me in. He’s hugging me so tight, I’m gasping for air. My tears are mixed with his sweat on his chest. My whole body is trembling. My heart is beating so fast and hard I could feel it on my chest. Then I feel a wet puddle on my head. I thought I was bleeding or something. I move my arm from around my dad to touch my head but I see my dad’s tears rolling down his face. The puddle on my head was from my dad’s tears.

Up until this moment, I’ve never seen my dad cry. I thought men don’t cry. By now my friends and my sister made it to the third floor. All of us are hugging each other and crying. I can’t stop saying thank you and sorry over and over and over. I’m so grateful they saved my life.

The reason I’m telling you my true story is because all of us at some point in our lives take on more than we can handle. As things in life get heavier, we go lower.

We set up high goals for ourselves. And as we grow and start to move up, our plate, or in my case the bucket, gets harder and heavier. We get stuck most of the time halfway through.

Unable to move forward. . . And going backward, it’s out of the question. We don’t want to get hurt and lose what we’ve achieved so far.

This is when we need people around us to fill up our buckets and lift us up to get to the next level.

We need to surround ourselves with people who are smart, kind, and good leaders.

My dad never considered himself a leader. As a matter of fact, he had many limiting believes.

He believed that he wasn’t smart because he never went to school.

He would often say, I’m just a construction worker. Even though he was smart and great at his job. He built the entire neighborhood.

But my dad was a great leader, especially in that situation. He gave guidance to the kids to help save me. He was there encouraging me to hang on and pull a little harder and he was there pulling me in when I needed to be saved, loved, and comforted.

My question to you is who’s going to fill up your bucket and lift you up? When you’re exhausted, who’s going to comfort you? And when you get to that desired level, who is going to be there to celebrate your success with you?